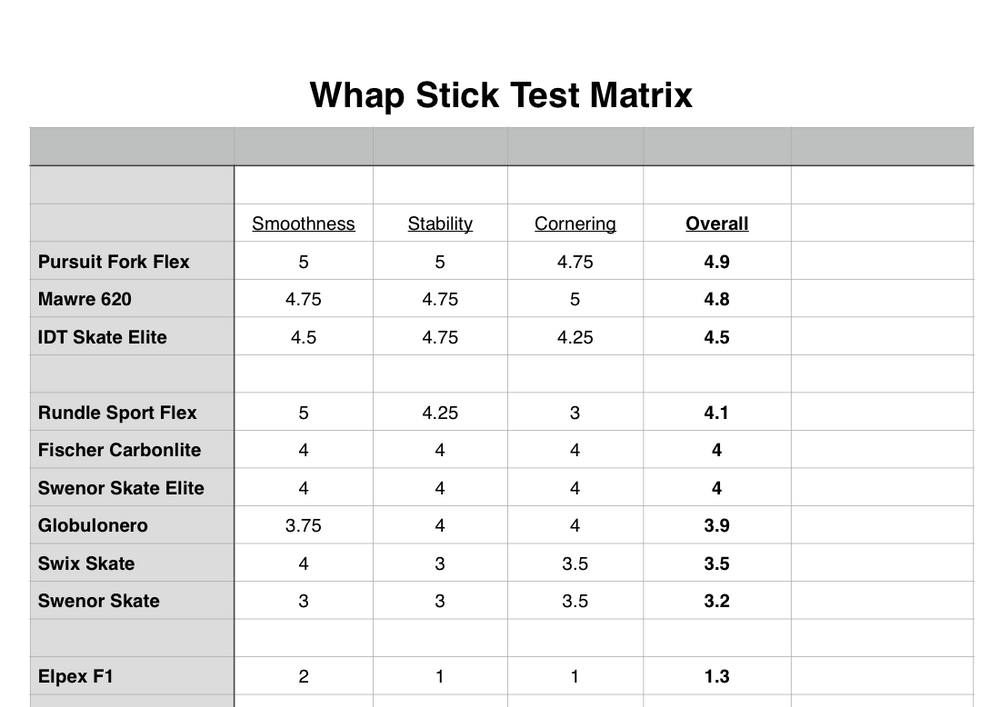 Note: Periodically inspect your wheels for cracked spokes. An indicator of a cracked spoke would be a clicking sound while rollerskiing. This can happen in really rough conditions from hitting cracks and is dependent on skiers weight and remaining wheel size. We suggest replacing wheels around 95 mm.

5 based on 19 reviews.
leave a review

I own 3 different roller skis now and these are hands down the best. I own V2 Aeros with the brake and speed reducer, Pro-Ski S2, and now the Pursuit Fork Flex Plus with the brake. I bought these because I moved to an area that has chip sealed roads, and I was tired of dealing with the clunkiness and hard-to-change flat tire of the V2 Aero. The Pro Ski S2 isn&#039;t even a viable option on chip seal if you enjoy having any feeling in your legs during or after a roller ski. I got the 2/3 wheel speed, and while it is significantly less rolling resistance, it makes for a great workout and I know I&#039;ll be stronger skier come Winter. These skate beautifully, just like on a freshly groomed trail. You still know you&#039;re on chip seal, but it hardly even registers as a mild annoyance. Buy these, you won&#039;t regret it.

Wicked nice! Everything as advertised and more: sooo smooth, stable, confidence inspiring – and fun! They even make our lousy New Hampshire roads feel like they’re from some high-tax state that actually invests in pavement. I swear I’m rolling more this year just because they’re such a joy to be on. The fasterskier.com review is spot-on. I like the brake a lot, too. It doesn’t weigh down the rear end, causing the wheel to drag, or get in the way when you’re doing agility drills. Having the brake opens up hilly terrain and routes I wouldn’t try otherwise, and I feel a lot safer in busy traffic areas. I put a clip on the end of the chord to make it easier to detach on those days when I’m doing flatter routes and drills. I still like my old roller skis, but these are a big step above. Great customer service, too.

I have been extremely impressed with the build quality and ride of my Pursuit Fork Flex Elite skate roller skis! They are extremely stable, smooth, and QUIET. By way of comparison, I also tried the Marwe 620XC, and prefer my Pursuits hands down. The ride is much smoother, and there is no annoying creaking off the kick as with the Marwes. Kudos to Pursuit for nailing it with this one.

I am extremely satisfied with these skis. Very stable and low vibration. The stability helps me perfect my techniques for the snow.

I used to live in Boston and bought the 670 mm version of these while there. Not fun to use on some of the bike paths around there compared to my old 620 mm solid metal frame roller skis because these frequently bottom out on all the bumps that were formerly navigable in those (and even my classic roller skis). After moving somewhere with better pavement, that&#039;s no longer an issue, and these are simply fantastic. Just be warned of this if you live in a place with large bumps in the pavement, especially if you get the 670 mm version. I feel like the better on-snow feel (and/or longer length) makes them seem slightly faster, so I would definitely get the speed 2/3 slow/very slow mix if you&#039;re undecided, unless you plan on taking them in the rain frequently. The different coefficients of friction between the front and back cause some weird things to happen on very wet pavement. I would not recommend the brake, as I&#039;ve found it doesn&#039;t do much, except occasionally have something get caught in there and cause a crash. I think it&#039;s generally easier to snowplow or walk down a steep hill than try to use the brake (not to mention better for the wheels).

I have been on my Marwe 610s for a really, really long time. Marwe&#039;s are fantastic roller skis, and I never thought I would give them up. But then I borrowed a friend&#039;s Pursuit Fork Flex rollers and was very surprised at how smooth and solid they were. At first I thought the floppy fenders were a bit odd, but they are SILENT on rough surfaces, which is very nice. I went with the 2/3 wheel combo, which is extremely close to my Marwe&#039;s in speed. Clayton was great to deal with.

After researching all the most well-known brands, I bought these on the advice of a gold medal winning NoCo guy, without mentioning any names, you can probably figure that out. Where I didn&#039;t take his advice was on wheel speed. Really really good skiers will always say get the fastest wheels, which is what I ordered initially, but after reviewing and confirming my order, it was recommended to me to go with the medium wheels (2). I also bought bindings and had them mounted at the factory. So far, after a half a dozen sessions both skate and double poling, I am very satisfied with the speed, the on-snow feel, and the quality. Only regret is, I should have bought the brake kit and had it installed, since I live in a hilly area.

This is my first pair of skate roller skis (prior skis were Jenex V2 930s with speed reducers). I purchased the slow #2 in back and super slow #3 in front, 105 mm wheels, 670 wheel base, and brake system. I typically ski near work (Northwestern Univ. Evanston campus and lake front trail)---sadly very flat, so I rarely get to use the brake. I took them to New Zealand on a recent work trip and their they proved a great safety feature. After putting about 400 miles on them by way of a 40 minute 7.5 mile workout per week, I started finding myself getting anxious about hitting the pedestrians and kids on the path, so I asked Clayton to send me super slows to put on the back. That gave me an 8% reduction (5:40 average to 6:12 per mile), which is a bit more comfortable. I think of it as altitude training/going up a long gentle hill. I’ve really enjoyed using these skis—great road feel and no problems with pavement cracks and stones, which use to jam my V2s and sometimes cause me to fall. Clayton has provided excellent support from the start, including checking the insoles of the Botas boots against a trace of my foot to make sure we got the right size, sending the super slows, and recently sending for free some lock washers after I accidentally flipped the brake around while putting the new super slows on the back.

These are my first pair of roller skis. So I have nothing to compare them to, or real experience with rollerskis to base my review on. That being said, I LOVE THEM ! Like the first time you go from ice skate to roller blade ( we canadian do it in that order ), there was a break in period where the body learns to control the skis. After that, we’ll, I can’t say that I feel a difference between those rollerskis and my snow skis. The motions and the feel is eerily familiar and similar. I highly recommend them !

These rollerskis are well designed and solidly constructed. I&#039;ve put in over 100K with them and have zero complaints thus far. The &quot;drop&quot; provides an experience that is unbelievably similar to real skiing. Highly recommend for anyone looking to improve their cross country ski technique/ conditioning!

very happy with the fork flex roller skis. The service was excellent and shipping very fast. Skis were lighter than expected and roll as smooth or smoother than other top rated models.

Awesome pair of rollerskis. I bought the 670mm wheelbase, and they feel really close to on snow skiing

The Fork Flex Pursuits are a major high note for my roller skiing here in Texas. Chip seal roads are predominantly the only safe skiing routes and with these rigs on board, the anticipated vibrating teeth chatter is harmonized to a small hum and close to nothing on a majority of the roads. The stability was noticeably better with the lower profile fork and with each sequential skate, I feel that nice snap, like on snow. which is quite nice, considering that I am in Texas. I like the 2/3 wheel combo, but the heat here eats up wheels, but I am skiing a ton, so that may be the issue. I would highly recommend getting on a pair of these skis.

Everything written about the fork flex is spot on. They are a great ski. Definitely a different feel from Marwe. My description is that they feel crisp and solid - like a well tuned road bike. They do a great job absorbing bigger bumps, but are about the same as Marwe on road buzz. I&#039;ve experimented with the 100 and 105 wheels, and would definitely say the 100s are the way to go. They may not last as long, but the added stability is worth it. The 105 wheel is noticeably less stable. Sometimes its fun to try something different.

Just finished my first workout on the Pursuit long wheelbase fork-flex. Very nice. At little more small vibration than my Marwes, but they soak up the bigger hits much better. Probably partially due to the longer wheelbase, which also allow them to balance better on the boot, with less tail sag.

These skis are top of the line without a doubt. the new drop fork design with the amount of flex they have makes you believe you are actually on snow. Great quality skis if you are looking for a pair look no further!

I have skied over 2500 Km on the Fork Flex R-skis and I&#039;m very pleased with their performance. The flex of the skis have a smooth and solid feel underfoot with a snappy quick response when they are put under stress during intervals or on steep climbs. The lower profile provide excellent stability allowing for a longer glide and efficient skiing experience. The 3/2 wheel setup simulate an on snow speed and feel. I would recommend that anyone in the market for roller skis should put Pursuit Fork Flex at the top of their list. 5 Stars

2015 season I switched to exclusively using the Fork Flex rollerskis after many years on Marwe 610s. I rollerski a lot and really like the Fork Flex r-skis much better. They have a snappy feeling to them compared to dead feeling of the Marwes and the Fork Flex absorbs more of the road chatter. The Fork flex r-ski does have a slightly higher swing weight, making it feel more like a longer skate ski, which is a good thing. Combined with Clayton&#039;s excellent customer service and the lower price of the Fork Flex, it was an easy decision to switch to these. I&#039;m happy!

I&#039;ve been rolling on the fork flex&#039;s for quite a few K now, and I can honestly say they are the most comfortable rollerski I&#039;ve ever put on. I&#039;d compare it to switching to a carbon fiber road bike from a 100% steel road bike---it&#039;s a drastic ride difference at least from the traditional aluminum shaft ski I was using prior. Performance doesn&#039;t take a hit either, as I&#039;ve been consistently hitting PRs on test segments this spring too. Very impressed, and I&#039;m glad I made the switch.