The benefits of rollerskiing are huge. It's widely agreed that rollerskiing is as big of a workout as swimming and nordic skiing. It's a full body workout and easy on the joints, something we all need to make it a lifelong sport. One thing it has over both of those sports is it's typically more convenient, as you can often do it right from you door, and it's a transport sport meaning you can do it to get somewhere. Let’s face it, we can only build so many man-made snow venues for nordic skiing to use ~4 months of the year. Most states have a rollerski season stretching 8-12 months! With busy schedules people don't want to spend a lot of time driving to the gym or snow to ski. With the right equipment and experience, you can most likely rollerski from your door.

This fall I took urban rollerskiing to the extreme, by testing it in New York City. Most cities have bike paths/lanes, and with Google bike maps feature it's easier than ever to find them. Only a couple blocks away from my hotel in the Times Square area was a bike lane, so short walk and I was able to put on the rollerskis and go. I was able to take this up to Central Park, where they have a really nice 10km loop. NYC also has bike lanes taking you to the Hudson River Greenway and other great trails. I wouldn't do urban rollerskiing however without a great brake as you need to be able to remain in control at all times. On this trip I used the Pursuit Fork Flex 670 mm with 110 mm speed 2 wheels and rear pull brake.

The future of nordic skiing is going to evolve dramatically into rollerskiing. We will never be able to get the majority of America on nordic skis, but people coast to coast can certainly get on rollerskis. Growth in rollerskiing is tremendous right now as people are realizing that the season is long, more convenient compared to many sports, and has huge health benefits. It's growing beyond the nordic states and nordic countries. While rollerskiing in NYC I heard lots of people saying things like "Wow that's so cool" and my favorite was a younger girl saying "Rollerskiing should be an Olympic sport." The future is exiting for rollerskiing! 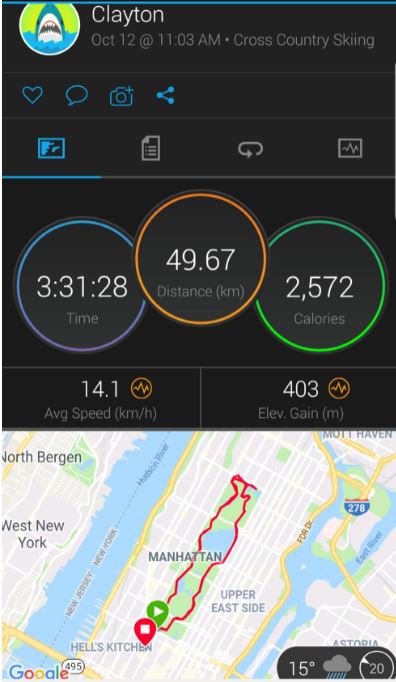